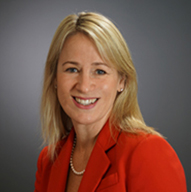 Jenny Brown spent her first few years of legal practice in complex commercial litigation for a large firm in Philadelphia.  Since 1996, however, Jenny has focused her practice nearly exclusively on municipal business tax enforcement.

Especially in economic times such as these, when municipalities are seeing their revenues stagnate and their expenditures rise, Jenny understands the critical importance of ensuring that existing taxes are enforced and collected before considering the imposition of new taxes or increased tax rates.  As a Commissioner in Lower Merion Township, Jenny required the design and implementation of a new business tax collection program that went into full force in 2008 and has resulted in tens of millions of tax dollars having been collected that would not have been collected without the program.

As a municipal tax solicitor, Jenny assists municipal finance departments, auditors, and outside collectors with enforcement and collection of Business Privilege Taxes, Mercantile Taxes, Local Services Taxes, Amusement Taxes, and other Act 511 taxes.  She provides legal advice for municipalities regarding the application and enforcement of local business taxes.  She has drafted Business Tax Regulations and updated Regulations for many local taxing authorities in Pennsylvania.

As a municipal tax solicitor, Jenny’s job is to ensure that existing business taxes are properly enforced and collected.  Her involvement has ranged from representing municipal interests in discrete cases, to implementing entirely new enforcement procedures and programs.  Jenny advises on all matters related to business tax ordinances and regulations, and works with the Tax Departments and Auditors in a team approach toward fair, effective and efficient enforcement of local tax ordinances.  Jenny routinely renders legal opinions on the taxability of various businesses and categories of receipts, advises the Tax Departments and Auditors, enforces local business tax ordinances, collects delinquent taxes, and represents those townships in Act 50 tax appeal hearings.

Jenny has served as Local Tax Hearing Officer for numerous townships and cities.  As such, Jenny hears appeals and renders decisions on tax petitions relating to Business Privilege and Mercantile Taxes.  Jenny has also served as counsel to a number of Act 511 Local Tax Review Boards.  In that capacity, she advises the Boards and drafts the decisions and opinions issued by those Boards.

On occasion, especially where municipalities have overreached and fairness requires an experienced municipal tax attorney on the taxpayer’s side, Jenny will represent private businesses in local business privilege and mercantile tax matters.

United States District Court for the Middle District of Pennsylvania

United States District Court for the District of New Jersey

 Local Taxation of the Oil and Gas Industry; How to Apply Local Taxes to Limited Liability Companies  October 2016

 The Effects of the Supreme Courts Rendina Decision on Local Business Taxes  June, 2008 and October, 2008

 Validity Challenges to Tax Ordinances and Declaratory Judgment Actions  how to best prepare your municipality while steering clear of the Local Tax Reform Act  October, 2000

 Raising Revenue, Act 50 and Act 511  How your municipality might be affected, what you can do to prepare for a potential decrease in property tax revenue, and the benefits of properly   and uniformly enforcing business taxes  oh and by the way, the Pennsylvania Constitution requires it! - October 1999

Jenny has successfully collected millions of dollars in unpaid business taxes for her municipal clients.